“You must unite behind the science. You must take action. You must do the impossible. Because giving up can never ever be an option.” — Greta Thunberg, Swedish climate and environmental activist.

These were the words the young Swedish climate activist and environmentalist, Greta Thunberg, has spoken in the US Senate climate task force meeting in Washington DC in 2019.

The impacts of climate change are undeniable. For the last few years, the world has witnessed more frequent devastating disasters and abnormal patterns of natural catastrophes around the world. One of the most remarkable disasters is the Super Typhoon Haiyan that struck the Philippines in 2013, leaving not less than 7,000 people dead and missing. On the flip side, the snow had blanketed the Saharan desert in Ain Sefra, Algeria, in early 2021. Without environment development and sustainability, the effects of global warming will continue.

One of the ways to delay and minimize the great impacts of global warming is by investing insustainable development and the environment, leading to the creation of green cities. For a country like the Philippines, what the local governments and communities can do is start creating and maintaining green spaces in the cities and urban areas. 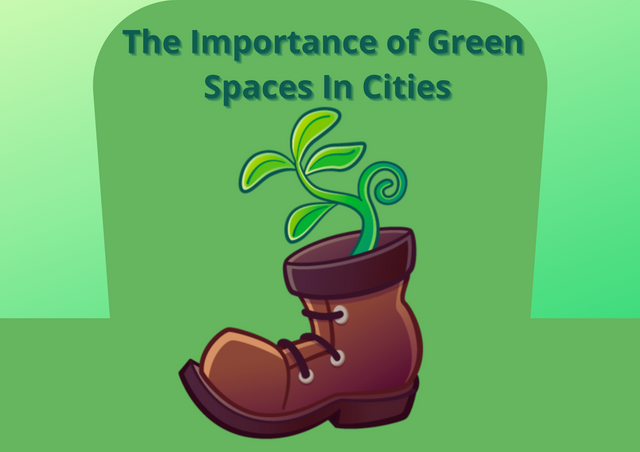 Why Green Spaces Are Important In The Cities

What exactly is a green space? Green space is an underdeveloped open land the public can access. Usually, this open space is filled with plants, trees, and different kinds of vegetation. It can be a community botanical garden, parks, and yards.

Urban heat island happens due to the dense concentration of cement, pavements, buildings, and other structures in the city that do not absorb the heat.

The Philippines is a tropical country, and with more severe summers, the heat index in cities, such as in Metro Manila, has become more intense.

Too much heat poses health risks, such as heat strokes and increases cases of rabies. At the same time, cases of fires are likely to rise during this period.

One of the ways to reduce urban heat islands is by creating more green spaces. Plants, trees, and rich vegetation are the natural air conditioning of cities. At the same time, they improve the air and water quality in the cities.

In the2030 Agenda for Sustainable Development, the Philippines’ 9th goal is to “build resilient infrastructure, promote sustainable industrialization and foster innovation.”

We can start by building green infrastructures and eco friendly properties in cities. A green city developercan integrate green spaces in infrastructures such as green roofs and urban gardens.

The concrete jungle of cities and urban areas is like a giant cage for many people. As humans, it is natural for us to somehow feel connected with nature. Included in the sustainable development goals of the Philippines is “ensuring healthy lives and promoting well-being for all of all ages.”

A study conducted by Frances Kuo, natural resources and environmental science and psychology professor at the University of Illinois, has found that people with less access to nature may experience psychological problems. It includes poor attention and cognitive function, poor impulse control, and poor life issue management.

Children with ADHD also show fewer symptoms when they have access to outdoor activities in a natural setting.

It only means that the imbalance between green and concrete spaces in the cities in the Philippines may take a toll on the mental health of people living in urban areas.

Prioritising a sustainable development project that aims to increase community access to nature through green spaces and infrastructures is a great way to reduce stress and improve the attention of an individual. 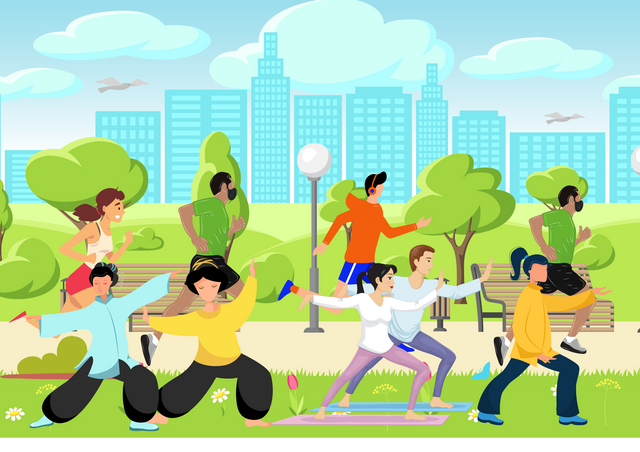 Still covered by the 3rd goal in the2030 Agenda for Sustainable Development–good health and well-being– is the improvement in physical health.

In reality, apart from a healthy diet, physical activity is essential in preventing these diseases. How could green spaces contribute to improving the physical health of the community?

According to several studies in Japan and the Netherlands, access to nature through green spaces drastically improved the general health of the public. They also tend to live longer.

Although luxury condo developers include gym and fitness facilities in their buildings, not all people living in the cities have access to one. So, where do these people go? The UP Diliman campus and other public parks and green spaces in the city are the favourite route for joggers and cyclists.

Street crimes such as robbery, physical assault, and even road accidents are not new in the streets of Metro Manila. To decrease the rate of these street crimes, the local governments have taken steps by increasing the presence of authority in crowded areas, especially in the wee hours of the night.

Another way to reduce crime rates in urban areas is by creating more green spaces such as parks, gardens, and recreational spaces with the help of a reliable green city developer.

According to the study conducted by Mardelle Shepley, a professor at Cornell University, green spaces have positively impacted the crime rate in the United States. Among the factors that resulted in the crime reduction rate are social interaction and recreation, biophilic stress reduction, community perception, and climate modulation.

In a country like the Philippines, trees in the central business district may be seen as a disadvantage, especially during typhoons.

Kathleen Wolf, a research social scientist at the University of Washington, has found out that streetscape tree planting as a part of economic efforts has affected consumer preferences in the area.

According to her findings, people prefer areas and business strips with trees to pure buildings alone. The trees have raised the visual quality of the location and potentially improve the people’s experience.

Street trees also have a positive effect on the opinions of the visitors towards the quality of the products and services offered in the area apart from elevating the visual experience of the business strips.

Green spaces and infrastructures may have a positive impact on the local economy, making these facilities an ideal environment and economic development and sustainabilityprojects.

Eco-parks, botanical gardens, and accessible yards may stick out like a sore thumb in the concrete jungle of cities, yet these open lands and spaces are not as barren as they seem to be. It has a positive impact on health, society, and the economy.

With the current situations of the cities in Metro Manila, creating public eco friendly properties and green spaces is the first step to sustainable development and environment projects like green cities.

4 Reasons To Invest In Sustainable and Green Cities

The 11th goal in the 2030 Agenda for Sustainable Development is sustainable cities and communities. But what exactly is a sustainable city? Based on the targets of this goal, a sustainable city or green city should have a strong social, economic, and environmental development and urbanization by providing adequate, safe, affordable, and inclusive housing, basic services, and a transport system adapting to environmental policies and mitigating climate change.

One of the primary goals of a green city developer in creating a sustainable city is to meet today’s generation’s needs without compromising the future generation’s ability to address its needs.

In South-East Asia, Singapore leads the race for a sustainable city and community with its drastic policies on green infrastructures and eco friendly properties. Here are the reasons why we should invest in building sustainable green cities in the Philippines:

One of the primary goals of a green city developer in starting a sustainable urban area and community is to reduce pollution.

Creating green spaces in the cities is only a baby step in decreasing the urban island effect in the cities. In pollution reduction, environmental policies concerning transportation and the manufacturing and industrial industries are needed.

Transportation and factories are one of the biggest contributors to air pollution in the cities. Switching to the solar-powered mode of transport, providing cyclists lanes on major roads, and implementing environmental policies and regulations on manufacturing companies can be the first step in reducing pollution.

Another sustainable development project that can be done at the community level is waste management. Ramping up recycling projects and proper waste disposal are good ways to reduce wastes that usually pollute the rivers, bays, and sea.

Basically, people living in a sustainable green city tend to live longer and have a better quality of life.

With less pollution, there is a lower risk of developing respiratory diseases and water-borne illnesses. At the same time, sports grounds, recreational spaces, and green spaces built by luxury condo developers encourage more people to engage in physical activities.

People of all ages can benefit from these public green spaces, from kids playing sports to seniors practising Tai Chi.

In addition, green scenery also reduces stress and anxiety levels. A healthier environment is beneficial to the mental and general health of the people. 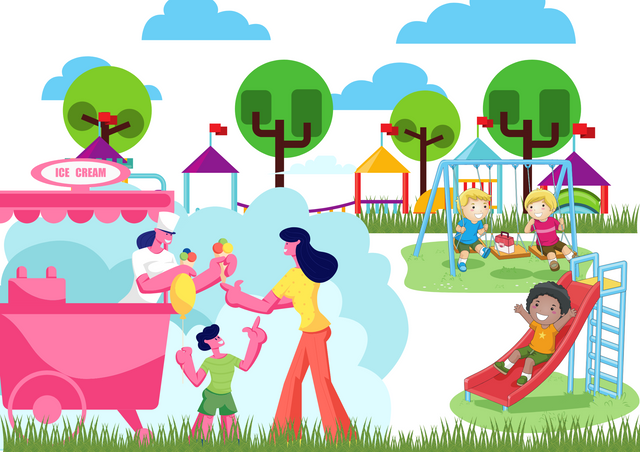 Cold summer nights seem too impossible in cities in the Philippines, especially in Metro Manila. But it can be achieved if the cities transform into sustainable cities as a part of sustainable development and environment in urban areas.

As discussed earlier, urban heat island is one of the reasons why Metro Manila is scorching hot every dry season. There areluxury condo developerswho incorporate green roofs in their high-rise buildings to improve heat absorption in the city to minimize the effect of the urban heat island.

At the same time, people will less likely rely on air conditioning units, which are also one of the biggest contributors to greenhouse gases and carbon footprint.

Car honks and the normal city bustle noise drown the bird chirps in the urban areas– if you will exclude your neighbour’s rooster in the group.

Green spaces,eco friendly parks and properties, and gardens improve the biodiversity in the city. It means that your kids can see more animals and insects like birds, fish, and butterflies outside the urban zoos.

Apart from the animals, biodiversity also consists of trees, plants, and flowers. Having animals’ natural habitat in the midst of the concrete jungle makes the community more aware and educated about the importance of preserving the environment.

It takes for the Philippines to make a giant leap to achieve environmental development and sustainability. But it doesn’t mean it is impossible. Compared to other countries, the Philippines is gifted with rich and flourishing flora and fauna. And it should not remain in the beautiful rural areas but should also be seen in urban areas to maintain the balance.

We could start by enriching our cities with eco friendly spaces and propertieswith the help of a reliable green city developer. And with this foundation, we can finally start building our own sustainable city.

Arthaland is one of the leading green developers in the Philippines, committed to bringing sustainability qualities to the cities through superior design and innovation. Visit Arthaland today.