If you have ever been out of the country, you have probably seen gigantic moving ships in the sea. Being a curious kid, you must have asked your parents about how those large ships do not sink or how they can move around water despite carrying loads of cargo. To feed your curiosity, your parents might have told you that there were balloons at the bottom of the ship to keep it afloat. You may have believed that all through your childhood. However, now that you are all grown up and probably rode one or more cruise ships before, you know that there are no balloons in those ships but machines!

From oars to marine electrification, the evolution of moving ships is worth a read. If you are naturally curious about many things that exist on earth or you are in the industry of marine technology, you might find this article interesting. Here, you will learn how electric power found its way into ships and how it revolutionised the industry of lorry transport and even fishing vessels. Many questions may be running through your head right now, so start reading to feed your curiosity! 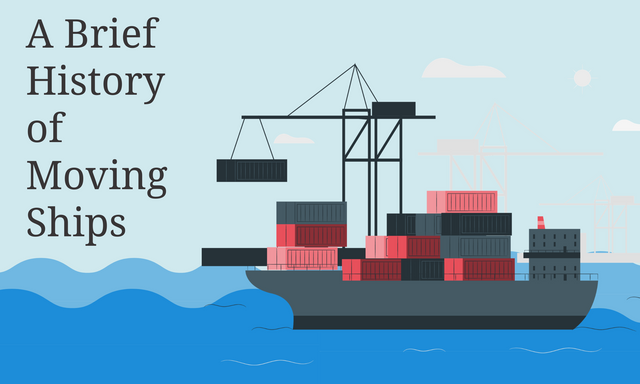 A Brief History of Moving Ships

If astronomers asked, What is out there? Oceanographers asked, What is down there? Earth explorers have already covered 71% of the planet but only 5% of the ocean. Hence, it has always been the subject of fear for many people. Despite that, humans have always found fishing as a livelihood, especially in prehistoric times.

While boat propulsion systems are still in the works, men fished only using small boats. The simple oar was not yet even in use! Instead, people in ancient times used their hands to paddle along in their boats. Eventually, they learned that long sticks can efficiently move their rafts in waters, but, of course, it was a challenge in deeper waters. Hence, the paddles soon come into the picture.

The first and admired ship design was Viking Longships. These were permitted to travel into the Meditteranean. They were wider and more advanced than any ship existing in 1000 AD. It was the Vikings who were recognised as the world’s master mariners since they were able to conquer the land as well as water with their manoeuvrable vessels!

As time passed by, vessels grew larger and faster. The biggest technological breakthrough happened in the 19th century. It was when steam propulsion technology was introduced. It was dethroned by diesel engines and gas turbine engines in the 20th century. Electric motors that you will see in the battery powered ship propulsion were soon used on submarines and boats since it was crowned as more energy-efficient propulsion.

The marine industry has soon been at its turning point. Today, vessel owners and operators do not shy away from the increasingly attractive value proposition of installing a battery system. What is the result? The rise of marine electrification! 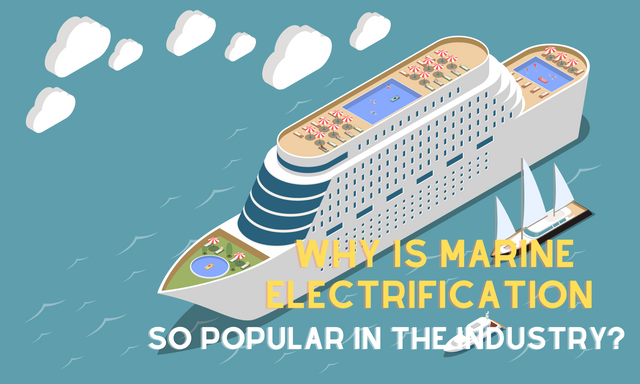 Why is Marine Electrification so Popular in the Industry?

Shipping, or sailing across oceans by using vessels, has been the method of choice for sending heavy cargo. Since then, marine transport systems are an integral part of maritime trade. Thanks to its promising high efficiency in functioning.

Technology was often seen as a liability rather than an asset. Plenty of stories in history showed that people before had feared something so alien and far from their traditional practices. Sticking to their roots are crucial to your grandparents and their grandparents. However, there is one generation that wholeheartedly accepted this change. Since then, the scenario is gradually changing these days. With more advanced machinery and communication tools, what had pushed the industry to rely on the sudden rise and popularity of the hybrid marine propulsion system, especially its electrification?

Here are some reasons why: 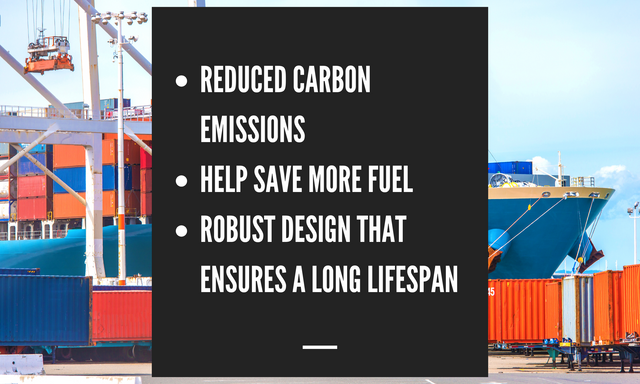 Since the existence of ships and marine transportation, the industry has had the freedom to ignore carbon emissions. It is time to dig up what you know about the greenhouse effect that was taught to you in school. The greenhouse effect is the natural process by which the sun warms the earth’s surface. There are greenhouse gases that release into the atmosphere, and this includes carbon dioxide. The bigger its amount, the more it heats the earth, which causes global warming.

The marine industry has not been strict in following the rules and regulations even if they existed in decades. It can be alarming to find out that in one container ship is equivalent to the emissions of 75,000 cars. Therefore, shipping has since increased its pressure to decarbonise its operations. Reaching the predicted 70% reduction of greenhouse gases by mid-century, charters and cargo owners are encouraged to use hybrid or diesel electric marine propulsion systems. Marine electrification is the hope of achieving this goal!

In cars alone, it is difficult to estimate whether you will reach a destination when the line that indicates how much gas you have left is nearing empty. What else for a ship to know how much fuel it needs to get to its landing port?

The answer to that question is getting battery powered ship propulsion. Many suppliers of energy storage systems for commercial and industrial shops are getting encouraged to replace a ship’s engine with a battery, where previously, it was only used as an addition.

Today’s offshore supply vessels have only one engine that has reduced the fuel cost by up to 30%. An offshore supply vessel would usually have four engines. But, when switched to a battery-powered propulsion system, it can save much more on fuel money! Thus, it would be no wonder that these electrified systems are glorified. It allows business operations to run smoothly and on a good budget.

A common mistake among businesses is that they do not consider the future. With a mindset that is only focused on the now, there would not be space for them in the future. Getting on track with the latest technology can make any business future-proof, the opportunity to continue their business for generations to come. With a hybrid marine propulsion system, the future is assured.

These propulsion systems are not making engines only working for the propulsion, but it also has an integrated generator. Not only does this saves space and weight in the engine room, but it also saves on fuel costs, lessens the noise and vibration, and reduces the fumes produced by the ships. These are all possible with the optimised design focused on system efficiency. Thus, you will enjoy the easy maintenance and long lifespan!

Among these main advantages of switching to an environmentally-friendly design of marine electrification, companies can also enjoy its high manoeuvrability, meaning you can reduce vessels’ turning circle. The reduced complexity with compact and lightweight design can make shipping vessels powered by electricity more efficient. Thus, the industry will live on for many years to come, and the Earth will heal the scar that it has earned from the damaging carbon emissions that vessels largely contributed! 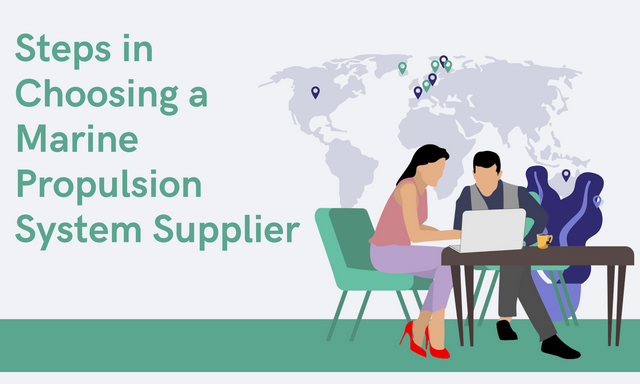 If you do not know yet, international shipping plays an essential role in facilitating trade among all countries. It has a significant contribution to the development of economic activities. As markets become more accessible through e-Commerce, it would be no surprise that shipping volumes soared.

The competition for being the most cost-effective and energy-efficient mode of mass cargo transport would be never-ending. Despite being in a seemingly global economic crisis, international trade has been making a vital contribution to being the pillar of developing a sustainable global economy. So, how will you choose your provider of boat propulsion systems technology?

Take note of these steps:

If they cannot give you names, there is always the internet and online forums to provide you with suggestions of which companies to choose. Remember that you should still take these suggestions with a grain of salt because some may use this to sabotage your operations.

Learn the company’s history and credentials

When you found a company that has established its name as a marine electrification provider, they are worth the effort. By effort, it means you should take the time to learn about its history and reputation in the circle of your industry. Their website is a good place to start.

Read and scan their website to ensure their legitimacy. They must also have a dedicated page for their accreditation and testimonials since it will prove that they are loyal to giving their clients the best service.

If their website did not provide the information you are looking for, but they have promising services and credentials, you should take the next step and talk to them. When you are curious about how their diesel electric marine propulsion systems will apply to your fleet, the best way to know is to ask them directly.

Remember that this is an opportunity to ask questions, so do not be afraid to ask the cost, maintenance, installation fees, among other things. It will help you reach a final decision whether you will choose them or find another company.

Look at your other companies (optional)

The last thing you want to happen is to lose sleep from all the ‘what ifs’ running through your mind as you lay down in bed at night. To avoid this, you can still look for other companies that can offer environmental-friendly solutions for your shipping business. When you discover more companies that can give you better and advanced products, all you have to do is go back to step one.

Last but not least, if you have been successful in finding a hybrid marine propulsion system provider, you should not let them go. It is especially true when your business philosophies align, and their products also cover what you have set in your budget. When sealing a deal, do not forget to tell them to stay in touch. Ask them how you can contact them when a problem arises.

Having a provider of environmental-friendly marine propulsions you can trust is the first step to a future-proof business in the international shipping industry. Therefore, you must never agree to a deal with the first company you met. With these steps, rest assured that you will land on a deal that is favourable to you and your company. 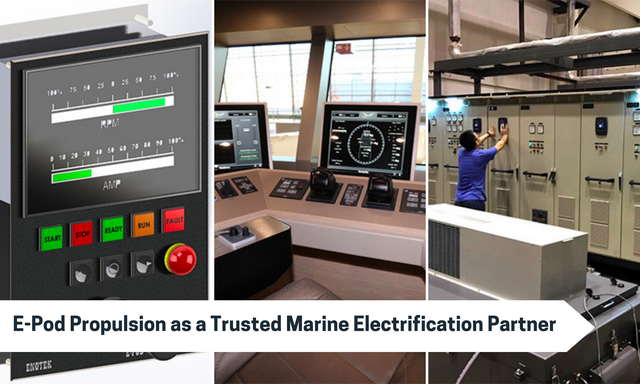 When you look at history right now, you will see that the oceans have been crucial to people in the world as a means of transportation. If you think about it, much of the food you eat, the clothes you wear, and even the phone or laptop; where you accessed this article has been brought to you by a ship. Since these are essentials that people cannot live without, it is difficult to negotiate the environmental changes that need to be done within the industry. To assist these changes, cutting-edge technologies emerge that will harness power for a new generation of hybrid container ships and, of course, marine electrification is one of them!

Choosing a trusted marine electrification partner is crucial for many companies in the shipping industry. Fortunately, E-Pod Propulsion is among their choices. When you choose an E-Pod, you will go in the same direction as in the future. Their goal is to reduce the pollutants present in the marine ecosystem. With their Go Green approach, any company would be part of the more sustainable and eco-friendly future where their business will remain operational.

If you are curious about how their products were designed and how they work, you can visit their website to know more about their revolutionary E-Pod systems! Send them a message to start a long-term business partnership with them today!