Have you heard of morganite yet? This gemstone, not so well known in name or appearance, has actually become very popular lately, and believes us; its unique appearance certainly justifies it. Engagement rings with morganite have experienced a real boom among young couples who want something unusual for their engagement, but again to be able to compete with the ultimate diamond.

If you are interested in what this unusual gemstone is about and what it looks like, or you are generally interested in something more related to engagement rings with this gem, see the rest of the text. Before you choose the Morganite Engagement Rings you need to understand about the stone itself.

What is a morganite stone?

According to its chemical composition, morganite is actually a variant of beryl, a transparent mineral with a hexagonal crystal lattice. The other most common variants of this mineral are emerald and aquamarine, i.e. green and light blue beryl.

Today, morganite is available in many places, but of course, the quality is not the same everywhere, and several factors will be crucial when it comes to quality, and when it comes to color. Today, morganite is the most popular non-diamond engagement ring after sapphire, and its price is much more affordable than diamond, which is completely expected. Morganite was initially surrounded by a certain amount of skepticism, primarily because it is not as durable as a diamond, but also because society has somehow conditioned couples that a diamond is the only real option if you want to commit to eternal love.

Does an engagement ring really have to have a diamond?

Despite the fact that diamond is really the hardest material that exists in nature, the fact is that society is the main and responsible for its popularity as the most valuable among gems. In 1888, diamond mining was in its infancy, so prices even began to fall, which is why several of the largest companies, primarily interested in diamonds, organized into a joint stock company, which began to control the supply and price of diamonds.

At the height of its existence, De Beers controlled most of the world’s stocks, keeping prices high by limiting supply, a strategy that not only managed to make the diamond rare enough to give its demand and price luxury and highly valued property.

The diamond also owes its popularity to the old marketing campaign “Diamonds are forever”, which primarily served to bring closer the invaluable value and eternal durability of this gem, but also to identify it with love and romance, which is why there was a general craze for engagement rings surrounded by a greater possible gem, for it was automatically a proof of eternal love. 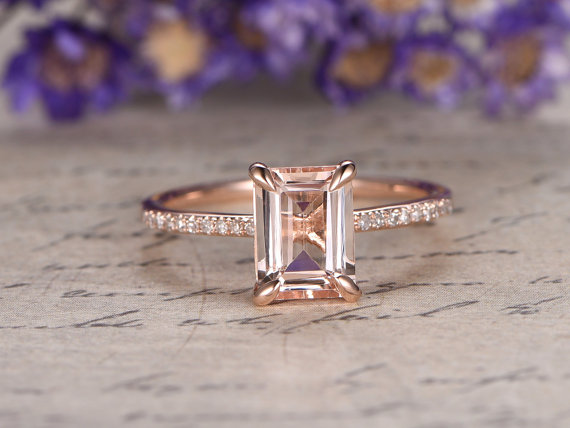 Has morganite become a direct rival to diamond?

What further tarnished the good reputation of diamonds are reports of child exploitation in mines, mining in conflict zones, as well as a huge number of fakes and copies, which made them accessible to the majority, to the detriment of quality workmanship and grinding. Of course, all this can be attributed to certain campaigns that were focused on the origin of certain gems, which spread like wildfire to diamonds in their entirety.

Either way, morganite may never be the same as diamond, but nowadays it definitely represents a competition to it, and on multiple fronts. Thanks to its specific, delicate pink color, and the grinding that brings the refraction of light to perfection, morganite is a trendy gem, and which will remain if the search for young brides continues for a unique ring that best reflects their personality, but also emotions that he will take with him into marriage.

Of course, in addition to the unique look, there is an incomparably lower price, so in addition to being unusual, morganite is also affordable, and there is the fact that morganite is actually much rarer than diamond, but its processing and grinding are not so demanding, since much softer. It is available in several sizes, according to which its value increases or decreases proportionally.

If you also want such a special engagement ring with morganite, visit jewelry store, take a look at assortment and find a unique engagement ring for yourself, because not only diamonds have to be forever, as there is every chance that morganite is on its way to becoming a serious competition and other precious stones, not just diamonds.

Origin of the Stones

Precious stones gems are minerals of natural origin, which are characterized by beautiful and pure color, transparency, high hardness and chemical resistance. They are characterized by their beauty and longevity. In order for a mineral to be classified as a gemstone, it must be rare, resistant and attractive. The year the gems were found has not been specified. The first specimens are believed to have been found around the Golconda River in India and are diamonds. They are the minerals with the greatest refraction of light and that helps the jewelers the most to determine the authenticity of the precious stone. In addition to diamonds, the most famous types of precious stones include ruby, emerald and sapphire.

Man has used gems for decoration since ancient times. There is also a belief in the mysticism of precious stones, and as a result, people wore jewels as amulets. Even today, they are sometimes used as medicines, more precisely as an aid in the treatment of some diseases.

Many people when they hear the word sapphire imagine a stunning purple-blue gemstone. For centuries, sapphire has been called the ultimate blue gemstone. From time immemorial, blue sapphire has been a promise of honesty, loyalty, sincerity and trust. The first sapphire mine was discovered in the Himalayas between 1882 and 1887 by the then Maharaja. Today, sapphires are one of the most popular stones for making jewelry.